Singer/songwriter, Bill McGarvey, was born the fourth child (and only boy) in a family of five. Bill showed musical promise very early in his life, writing his first song, “Big Brown Bear,” at the tender age of eight. Flushed with pride at his accomplishment, he walked across the second-floor hallway of his childhood home and sang the song for his older sister, Patty.

After a 20-minute rendition of “Big Brown Bear” at top volume, his sister threw him out of her room and locked the door behind him. Undeterred, Bill headed downstairs to the family TV room—quietly humming his new ditty to himself—when the muse suddenly struck once again. His second song, “Big Brown Dog,” and third, “Big Brown Cow,” came to him in a mad burst of creative energy that afternoon. Never before—or since—has McGarvey been so overpowered with musical inspiration, not even at age ten when he penned the timely “Don’t Get Homesick” to his sister, MaryShiela, baby-sitting down at the Jersey shore.

His parents were quick to recognize the undeniable talent taking shape under their own roof and seized the opportunity by signing young Bill up for piano lessons. Following a difficult first lesson in which he threw up at his teacher’s house due to her use of “chunky” peanut butter in the peanut butter crackers she made him for lunch (who eats chunky peanut butter?! Ewwww!), he settled into his musical instruction quite nicely.

Though his teacher tried valiantly to interest her young pupil in the great classical composers, McGarvey couldn’t be swayed from his devotion to mastering his beloved “Marine Corps Hymn.” His love for the ‘the few, the proud,’ however, wasn’t matched by his love of practice. And at the end of his second year of lessons, tragedy visited the youngster. While performing the “Marine Corps Hymn” for the second straight year at his recital, an enormous case of stage fright gripped McGarvey and caused him to freeze up on stage for a solid three minutes. Humiliated, he stopped taking lessons immediately and entered into a period of self-examination that stretched out for several years. During this time, he toyed with the idea of becoming a professional basketball player and a priest.

In the ninth grade, however, the need to create overpowered him once again. This time it came to him in the form of the drums. After begging his parents for 15 months straight, he received his first drum set for Christmas when he was 14 years old: a used, orange sparkle, Japanese “Heit” kit. After an awkward start on the instrument, Bill began paying his sisters back in earnest for all the torture they had inflicted on him throughout his childhood. He played as loud and as long as he could in the back of the family’s TV room, all the while insisting that he didn’t want his practicing to interfere with their favorite programs. Sweet victory was his.

During a protracted period that some refer to as his “college” years, McGarvey briefly “went Hollywood” and began hogging national TV coverage at college basketball games as the drummer out in front of Georgetown University’s Pep Band. He also began singing and writing songs with The New Buicks a band he co-founded at Georgetown that became a finalist in a national campus battle of the bands sponsored by Energizer Batteries and hosted by comedian Sinbad. They ultimately lost to a band from Harvard called, The Rhythm Method (ugh) … and McGarvey has been a committed Duracell user ever since.

After graduating, he found a furnished, one-room basement apartment in Bensonhurst, Brooklyn and moved to New York City where he began to play drums for various NYC bands, including Winter Hours, Who’s Your Daddy, George Usher, The Vipers and The Liquor Giants.

It was around this time that Bill was introduced to Stephen Dima at the foot of the stage of New York City’s legendary club CBGB’s and a partnership was born. McGarvey began to get the itch to move out from behind the drums and write again and approached his new friend with the idea. Dima seemed interested at the prospect and asked young Bill about his past writing experience. McGarvey excitedly told him about the “Big Brown” animal-song trilogy that he had penned in his early years. Dima agreed to write with him anyway.

Together, this time with McGarvey out in front singing, they formed the band Valentine Smith and released three records between 1994-2000 that garnered critical kudos from the likes of the New York Times, CMJ, and the New Yorker, among many others. The Washington Post called them “purveyors of one of the years most addictive pieces of jangle candy,” while Billboard dubbed their performances “magical” and chose Valentine Smith’s first single “Katie’s a No-Show” as the only independent song on their critics’ year-end “Best of” list.

Valentine Smith also toured extensively and shared stages with the likes of The Wallflowers, NRBQ, Shane MacGowan, The Lemonheads, and Joan Osborne.

After Valentine Smith’s break up, McGarvey set his sights on making a more personal record than he could in the context of a band. Equipped with 4-Track and 8-track tape machines and ProTools recording software, he set up a studio in his kitchen and began recording his new songs—playing most of the instruments himself.

On his debut solo cd, Tell Your Mother, McGarvey’s melodies feel like they’re being beamed directly into the new century from a 60’s AM radio deep in his soul, where he combines them with an intelligent, slightly fractured and completely personal lyrical perspective clearly tuned into the details of the present.

Tell Your Mother earned raves from publications ranging from Time Out New York, the Chicago Tribune, Hartford Courant, Philadelphia Weekly and Performing Songwriter magazine. The disc was also included in several year-end “Best of ” lists in both the US and UK.

Next, McGarvey went to work on a new collection of songs entitled “Beautiful Mess.”

“Beautiful Mess” revealed just how far McGarvey had come as a songwriter and singer since his last release. McGarvey maintained the pop melodicism on “Beautiful Mess” but the overall tone musically and lyrically was far more intimate than his debut. Songs like “Girl Meets God” and “Citizens’ Band” reveal debts to artists like Elvis Costello and fellow Upper Darby native Todd Rundgren while “Gone, Gone, Gone” has the flavor of a 1960s technicolor film score and “Please Don’t Go”—with its portraits of the desperate lives being lived in the fictional town of New Jerusalem—is the closest thing to Gospel music the suburbs will ever get.

The music on Beautiful Mess is accompanied by the art work of Ari Huff who—in addition to being a great bass player in McGarvey’s backing band The Good Thieves—is also an incredible artist with a love of comic books and graphic novels. After seeing some of her drawings for a comic book she was working on, McGarvey asked her to create a cover for Beautiful Mess. Huff took a copy of all the lyrics home with her and over the course of the next few months she created a mini comic book—with a narrative all her own — based on her impressions of the songs’ lyrics.

On the new collection, McGarvey augmented his own cocktail drums, guitars, mandolin and harmonica with other members of The Good Thieves including Jason Loughlin (Ben Arnold Band) on guitar, piano and bass; Mike Tichy (Jim Breuer and the Loud & Rowdy, The Mooney Suzuki) on guitar, bass, keyboards; Stephen Hund (Jerry Garcia Band) on drums and backing vocals and Kimberly Nordling Curtin (Valentine Smith, The Gnomes) on violin and flute.

He also enlisted Tony Leone (Ollabelle, Chris Robinson Brotherhood) on drums and mandolin and Byron Isaacs (Ollabelle and The Lumineers) on bass to play on several tracks. Amy Helm, also of Ollabelle and daughter of the legendary Levon Helm (The Band) sings a beautiful duet with McGarvey on “True Blue.” Rounding out the Beautiful Mess guest list is Andy Burton (John Mayer, Rufus Wainwright, Cyndi Lauper, Steven Van Zandt, Ian Hunter) on piano and organ and Jon Graboff (Ryan Adams and the Cardinals) on pedal steel.

The diverse group of songs and sounds on Beautiful Mess found its unity in McGarvey’s unique ability to infuse timeless pop song structures with his wry lyrical sensibility. 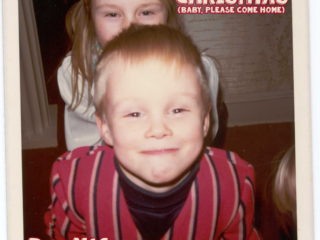 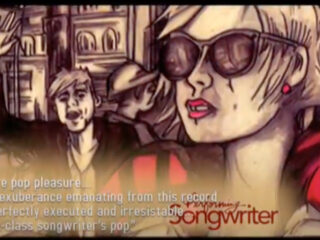